The World Is Broken

One Word At A Time

Television doesn’t play as large a role in my Halloween as it does to Christmas time.  Oh man… the Christmas specials that I need to watch each year come together into a substantial list.  Halloween does not really fall into the TV heavy area, although there was a lot of time spent in front of a television.  Halloween was more about the monster movie marathons and less about the actually Halloween television specials.

There are of course some exceptions, like the Great Pumpkin, South Park Halloween specials were awesome as well, and new favorite, the Community Halloween special where the zombie apocalypse breaks out at Greendale.  These are a few of the specials that have become a part of my Halloween tradition but none more close to my heart really making me feel like Halloween is near than the longest running TV show in prime time history, “The Simpsons”

The “Treehouse of Horror” series usually came on a week or so before Halloween and it was the defining moment of the Halloween season. The graveyard and the  “Treehouse of Horror” title made my brain twitch and truly believe that Halloween is upon us.  I long to return back to the days of watching these horror anthologies where the Simpson writers had total freedom to do whatever they wanted to the characters without worrying about the canon of the show.

I get a little apprehensive when it comes to the TOH series.  I don’t think I’ve seen the latest episodes and the last one I watched was just an anthology of movie parodies.  Not horror movies, not even a scary cartoon, just a funny parody.

I think it was Treehouse XXI where I lost the will to follow the series.   The first of three cartoons was about Homer being bitten by a spider and paralyzed only able to communicate through passing gas.  The end of the episode sees him being bitten by a radioactive spider and becoming a paralyzed spider man.  The second cartoon, the only one that tries to be a little horror-ish, is one where Ned becomes a serial killer thinking he’s doing God’s work, when in reality it was Homer speaking to him through a Bible-shaped radio.  The third is simply an Avatar spoof.  Yes, the blue alien, Steven Spielberg avatar.

It felt like they just stopped trying.  I think I may go and watch the newest Treehouse tonight and see if they redeemed themselves last year but I highly doubt it.  Al Jean just doesn’t have the same approach and style that James Brooks had.

That being said, there are some great moments past in this series.  I really enjoyed how they were tied together.  Unlike the recent episodes that just throws a few disconnected cartoons at you, in the past they were all held by a narrative.  There was a Halloween party where each cartoon was a story that one of the characters was telling in an effort to scare the others, which paid off in the end with the kids all laughing and wondering “who could be scared of stories like that” and then a shot of Homer shivering with fear.  Earlier series had a similar premise of the children taking turns telling stories except it was in their Treehouse (appropriate for the Treehouse of Horror). 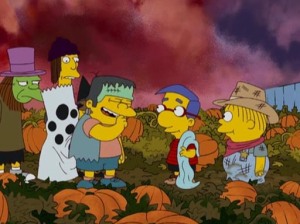 One of the ones I liked from the more recent episodes is when the family falls asleep in church and each individual cartoon is a dream that one of the characters is having.  They were religious type cartoon, even one parodying David and Goliath, which illustrates my “they are NOT horror anymore” ideas… but to save the episode the Simpsons wake up at the end of the service and everyone is already gone.  They leave the church to reveal the apocalypse, complete with four horsemen and everything.  The Flanders are saved and brought into heaven through a beam of light…. a light that comes on Lisa but as she’s being ascended Homer grabs her ankle bringing her back to the ground with her family.

The cartoons strayed but the overall tone stayed the same.

Also don’t get me wrong, parodies are a great way to celebrate the Halloween season and the Simpsons have done it masterfully in the past.  Parodying movies like Dracula, Nightmare On Elm Street, The Lost Boys, The Shining, and even episodes of The Twilight Zone just to name a few, has become a staple of the series.  When they start parodying Avatar because that’s what was popular at the time I lose my respect.

But despite of the qualms I have with the later offerings I cannot dismiss this series.  Treehouse of Horror to any 25+ year old fan is as essentially to the full Halloween experience as Pumpkin carving and black cats.  There’s just so much to love about this series, and even if I believe it has lost touch with the X-factor that made it great (which can also pretty much said for The Simpsons in general)

A tree house of Horror marathon is indeed in my future between now and October 31st.

When I think Halloween, there are two particular specials that come to mind. I’m going to talk about one in this entry and the second in the next.

The first is a tradition that I hold dear and I’m sure a lot of other people my age and older also appreciate it.  How many of you think about Linus sitting in a pumpkin patch all Halloween waiting for the Great Pumpkin to show when you think of traditional Halloween images?

I’ll admit that the peanuts crew and their specials are a little before my time with a release date of 1966.  Through the magic of re-runs on YTV Charlie Brown has become ingrained with my early development.  The thought of the great pumpkin was so intriguing to a young ShallopNewf

I haven’t seen it in many years and I”m sure a lot of this love comes from nostalgia, but Peanuts is Peanuts… I’d imagine going back it wont lose any of its splendor…. I think I’ll have to try that out tonight.

The part about this story that I find compelling is not necessarily the Halloween aspects of it.  I guess you can draw a parallel with this special and just the idea of having faith in anything intangible. *coughReligioncough*

Linus sends his letter to the Great Pumpkin in the hopes the Pumpkin will visit.  This special is rife with the the gang telling him his crazy and just wasting away his Halloween in a pumpkin patch instead of having fun with his friends.  It’s a fools errand but Linus sticks to his guns.  He doesn’t need to make them understand because he knows the Great Pumpkin exists and there is a chance that he’ll appear tonight.

I think what I enjoy about it is that in the end … oh wait.

… is that really necessary for a beloved childhood special that is nearing 50 years old??..

The pumpkin does NOT come to visit Linus that particular year. This part, I’m sure, catered to my inner-developing Atheist before I knew it even existed.  Somewhere there was a voice saying, “ha ha that’s what you get believer!”

However before some of my followers leap on me for that statement, I need to draw attention to the ending and how it show’s that it doesn’t matter whether or not faith is justified.  The important thing is that you have it.  One of the scenes that I vividly remember from this special is the ending.  An exhausted Linus is talking with his good buddy Chuck when Charlie tries to reassure his best friend by telling him “It’s okay, I’ve done stupid things too”… upon hearing his friends counsel Linus lets loose a tirade that takes Charlie Brown off guard.

Linus vows that next Halloween, he’s going to find an even bigger and better pumpkin patch, and he WILL see the Great Pumpkin.

There is absolutely no evidence other than his own faith and yet he remains undeterred from his belief.  As an adult able to look at the psychological side of this special I can’t lie, though the fact there was no Great Pumpkin caters to my inner atheist there is something about Linus conviction that I envy.  For other children his age (and me as a child) Halloween was about getting as much candy as you possibly could.  For me personally, it was a competition with my classmates to see who could get the most.

For Linus, October 31st meant so much more.  It was a lot more meaningful then the sugar rush and gut rot that the others experienced.  Linus is able to see something very special about this day.  Personally I think this is the earliest contribution of Halloween becoming so dear to my heart.  The thought of this day being about so much more than just candy and costumes began right here.  This time of year can (and does) mean so much more… but I’ll get into that a little closer to the day itself.

Needless to say “It’s The Great Pumpkin, Charlie Brown!” is a timeless Halloween special that should be seen and can be appreciated by all ages!

This is a late night notice to let all you readers know that today’s post will be live tomorrow, it’s a two-part entry so that’s going to count as Oct 21 & 22nd entries.